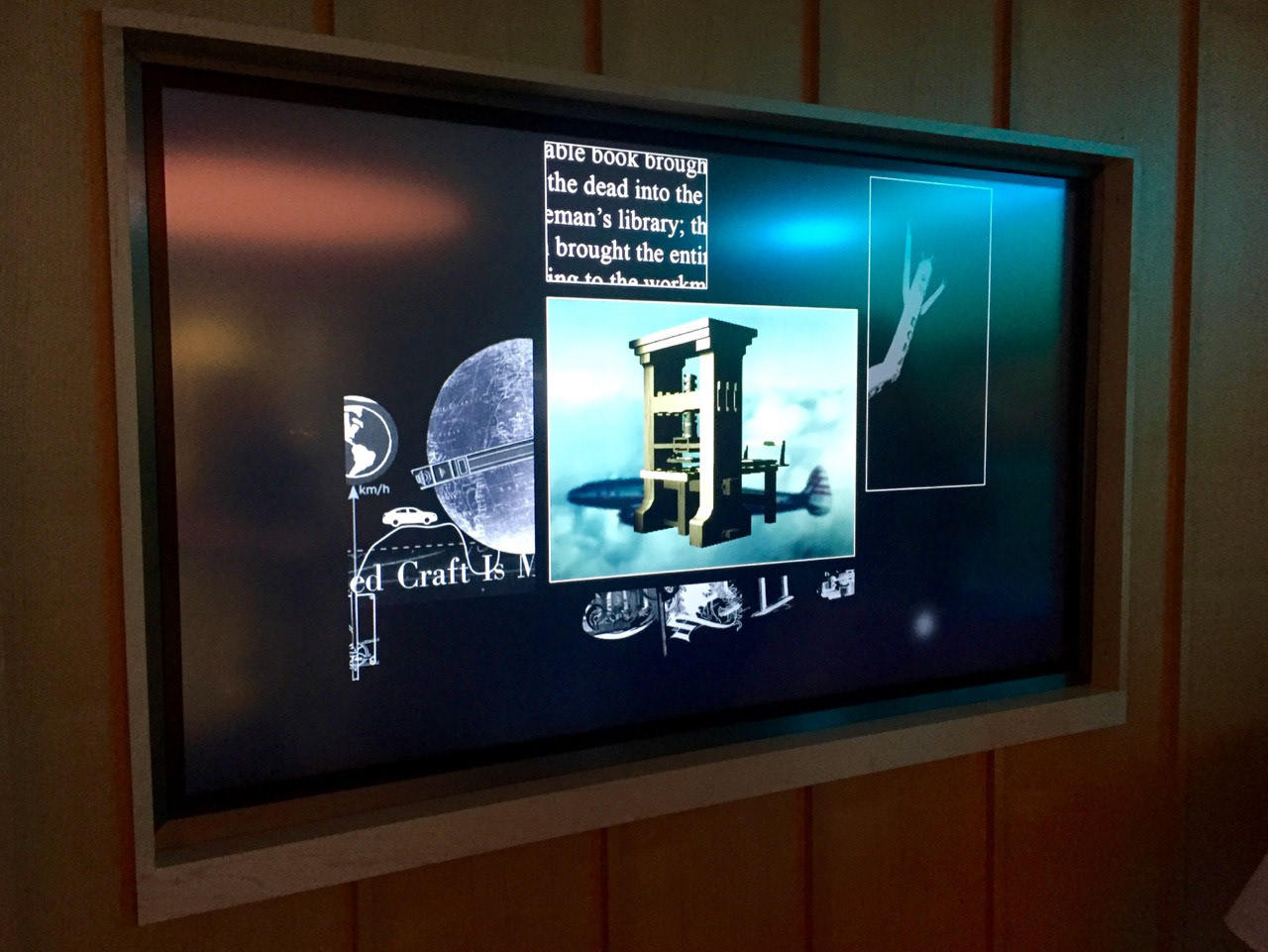 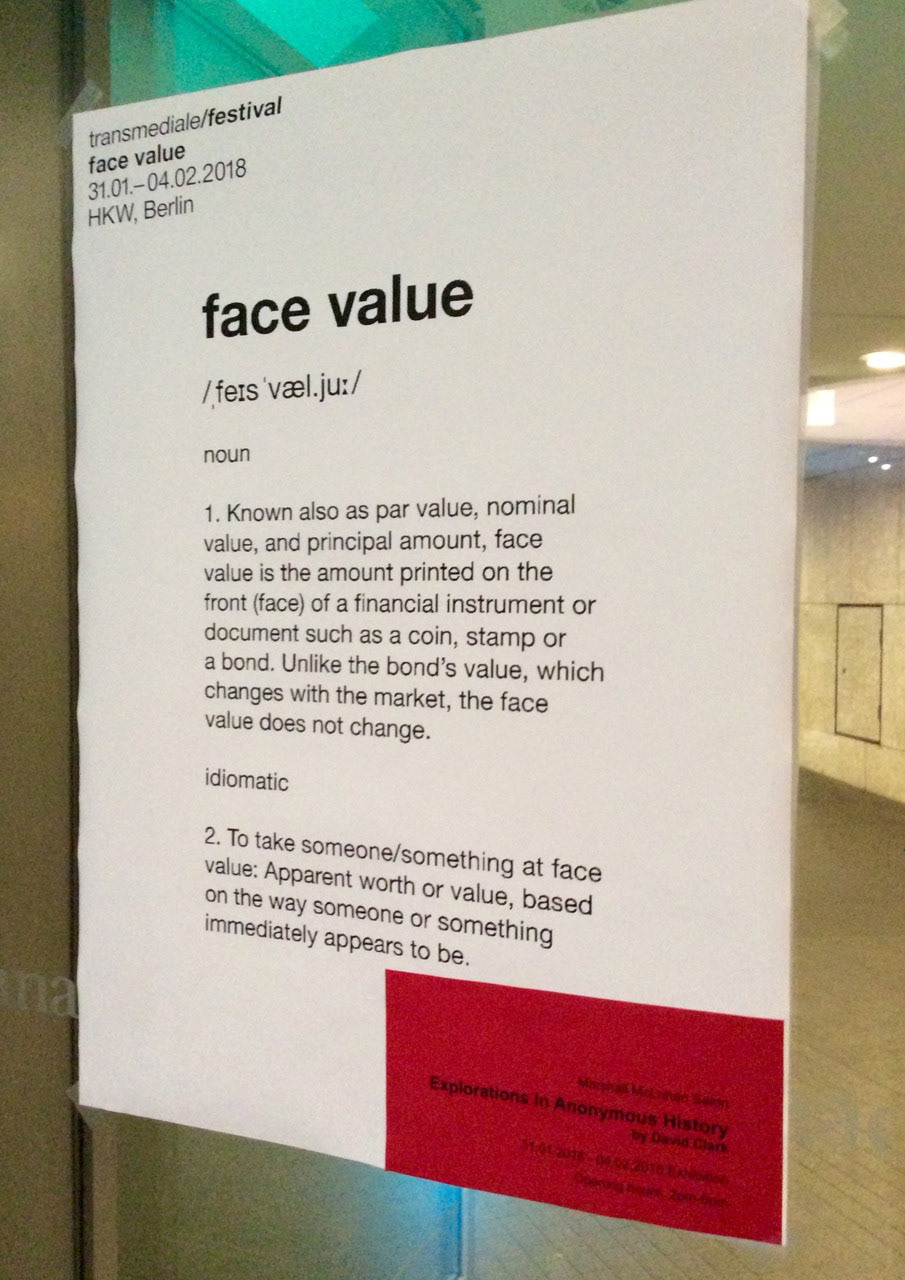 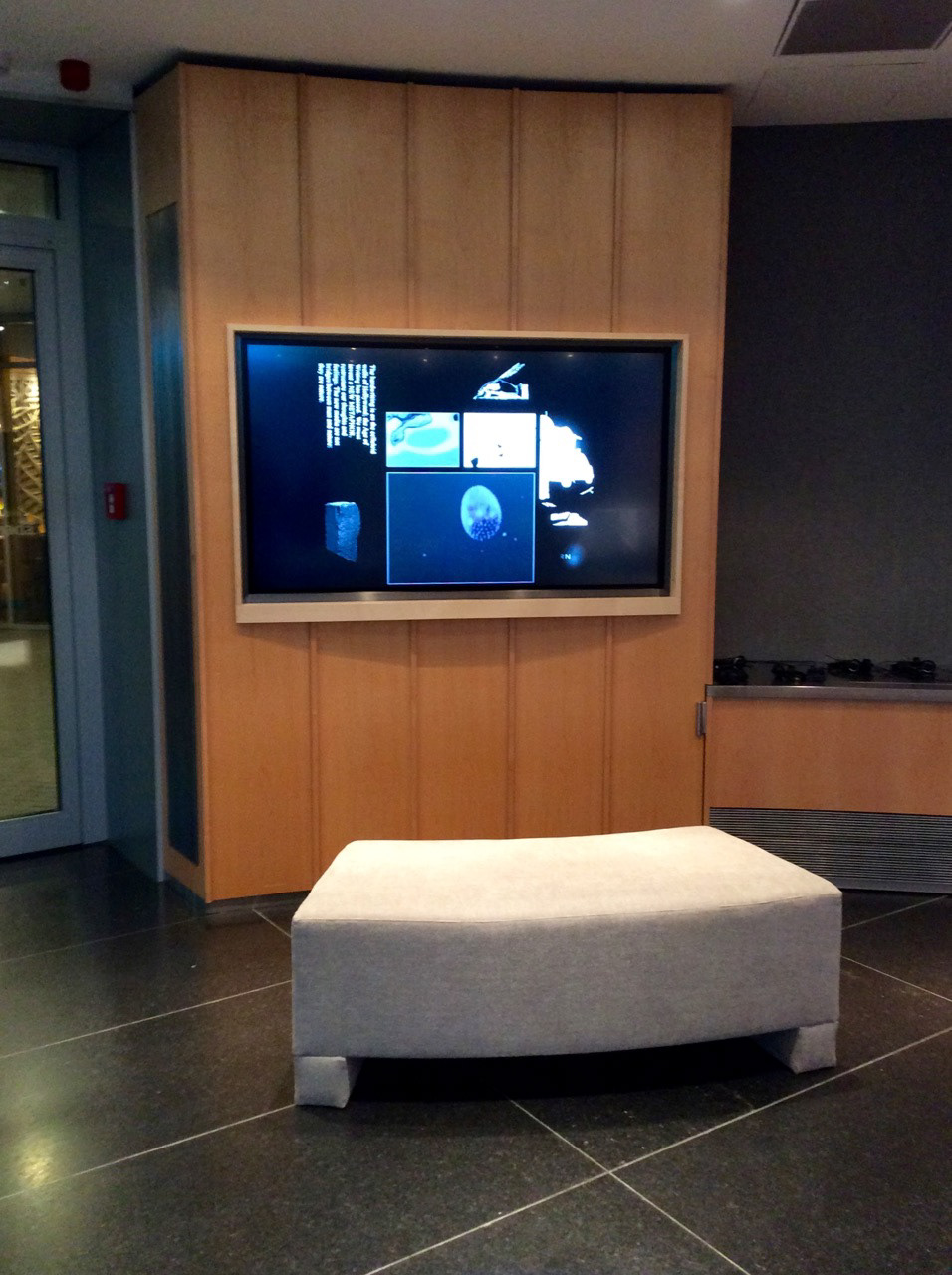 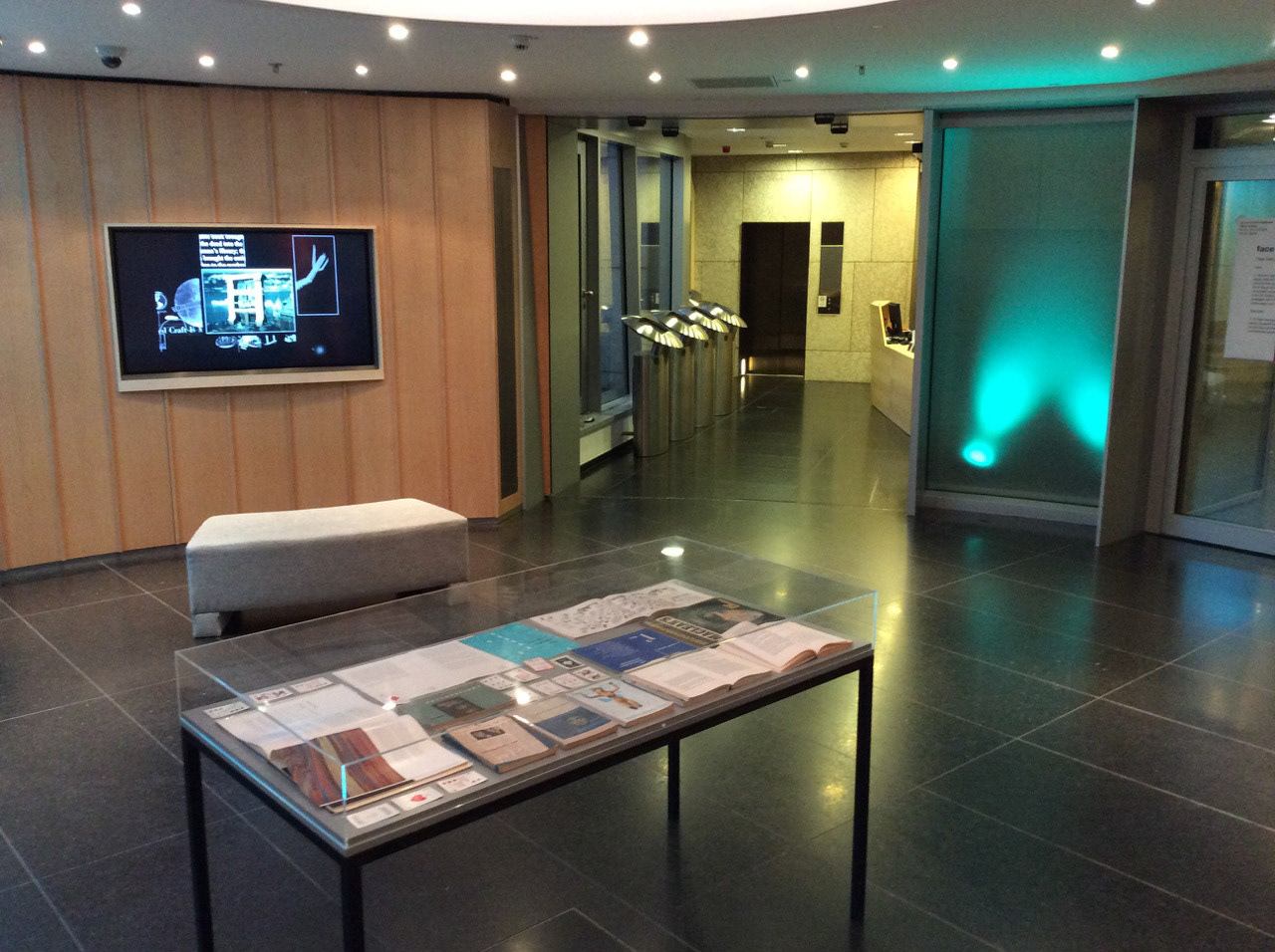 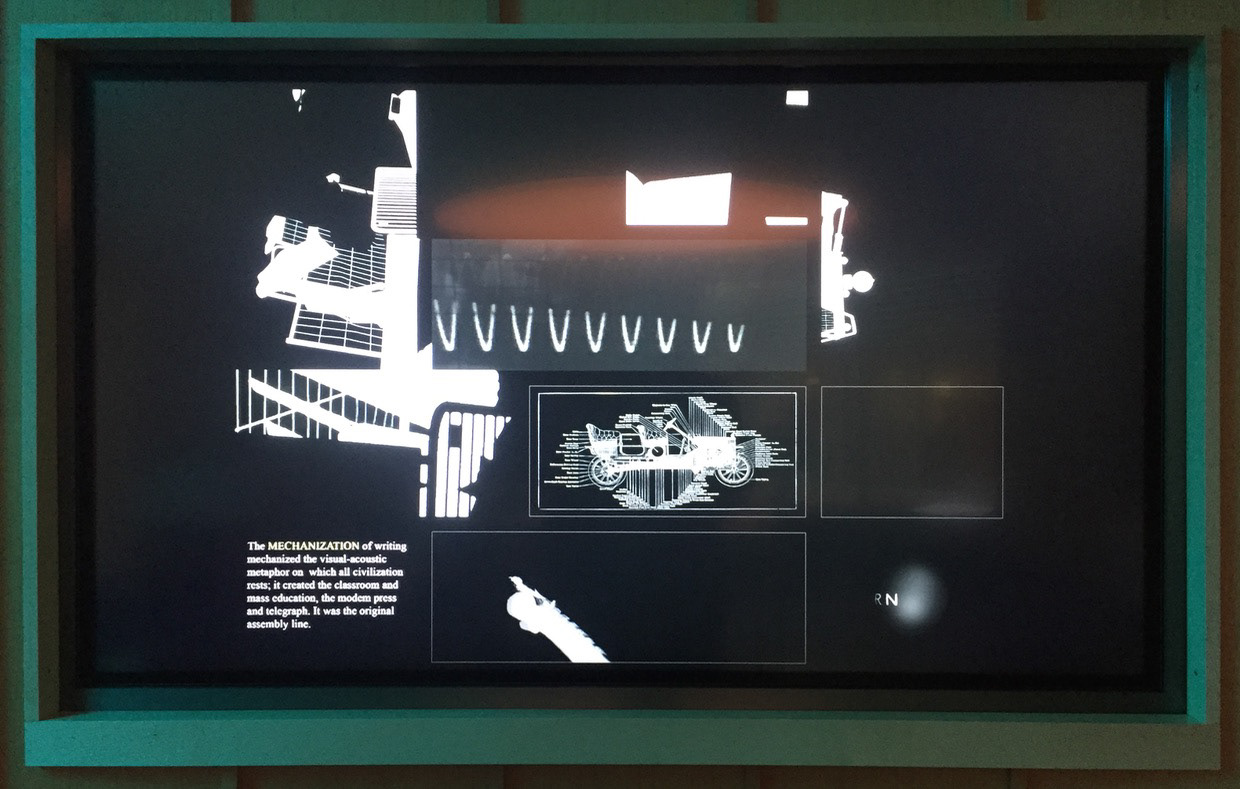 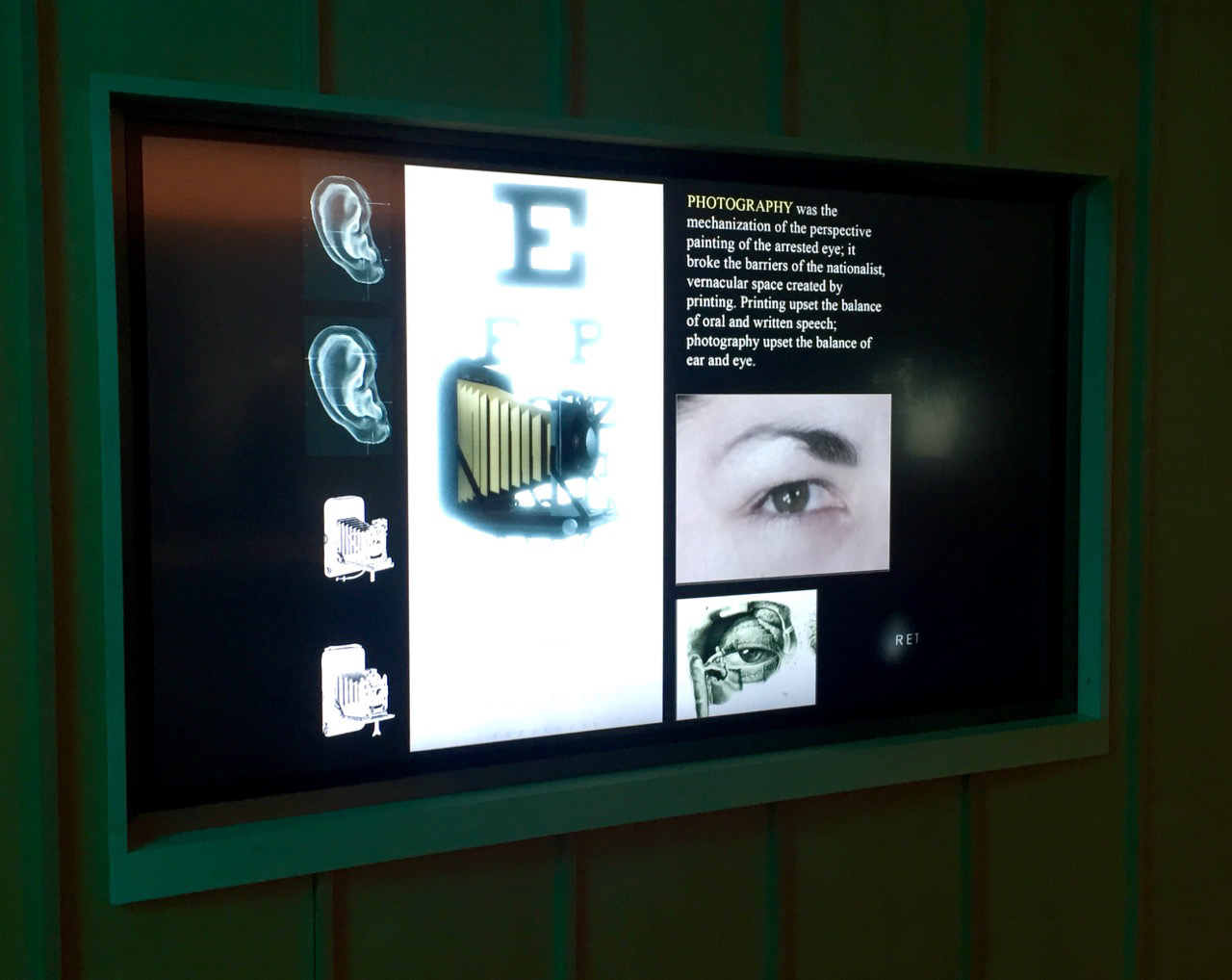 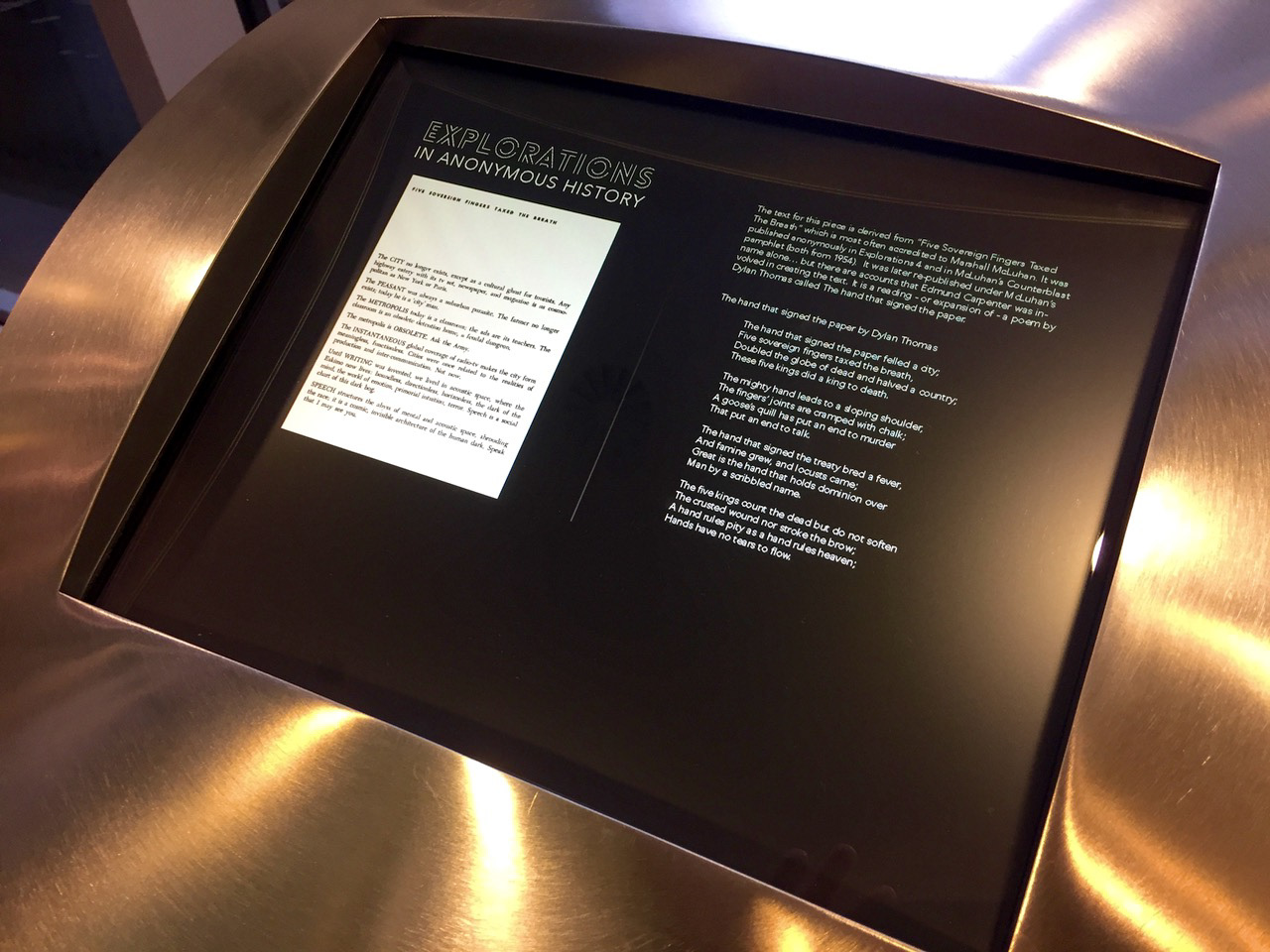 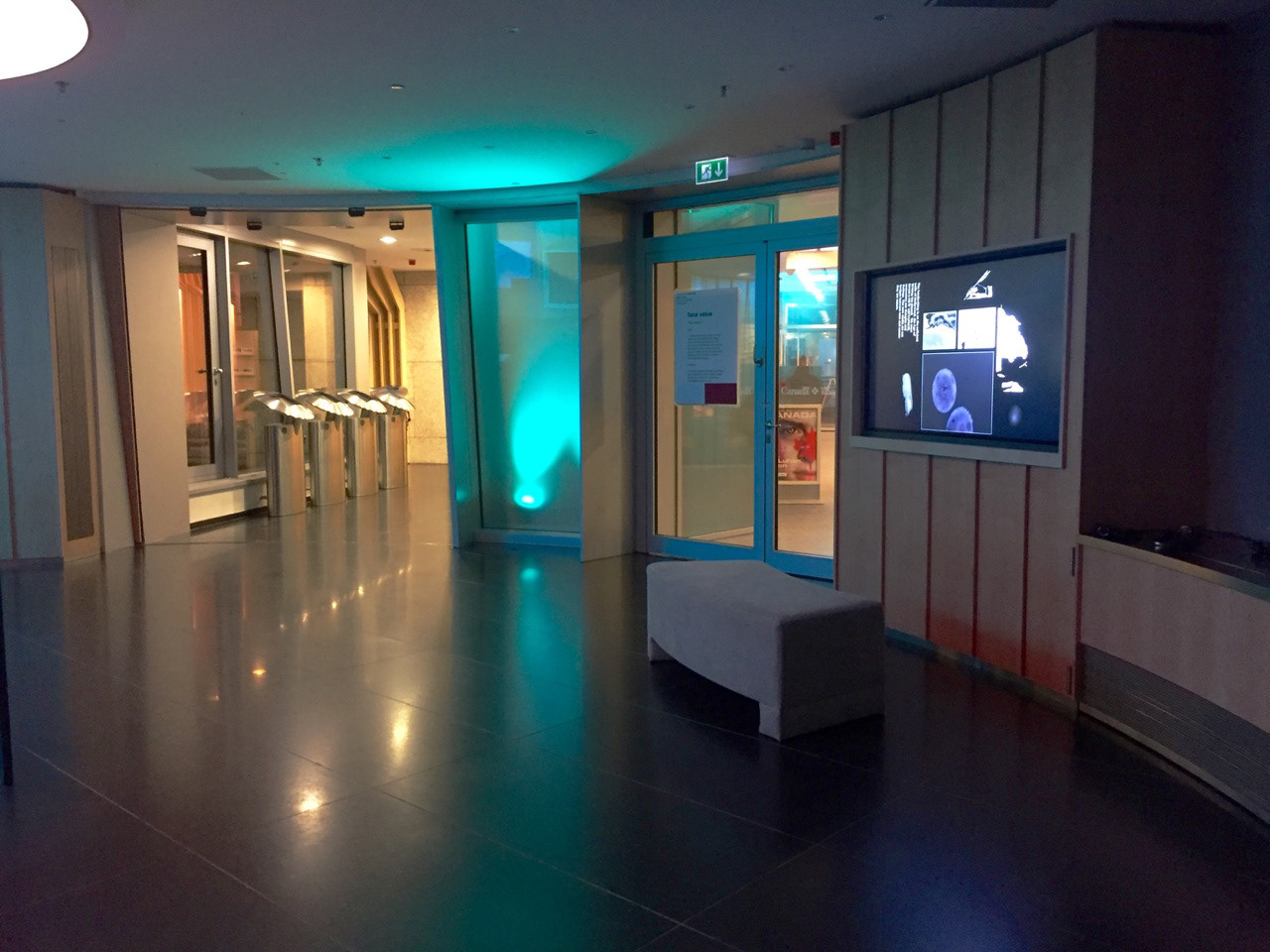 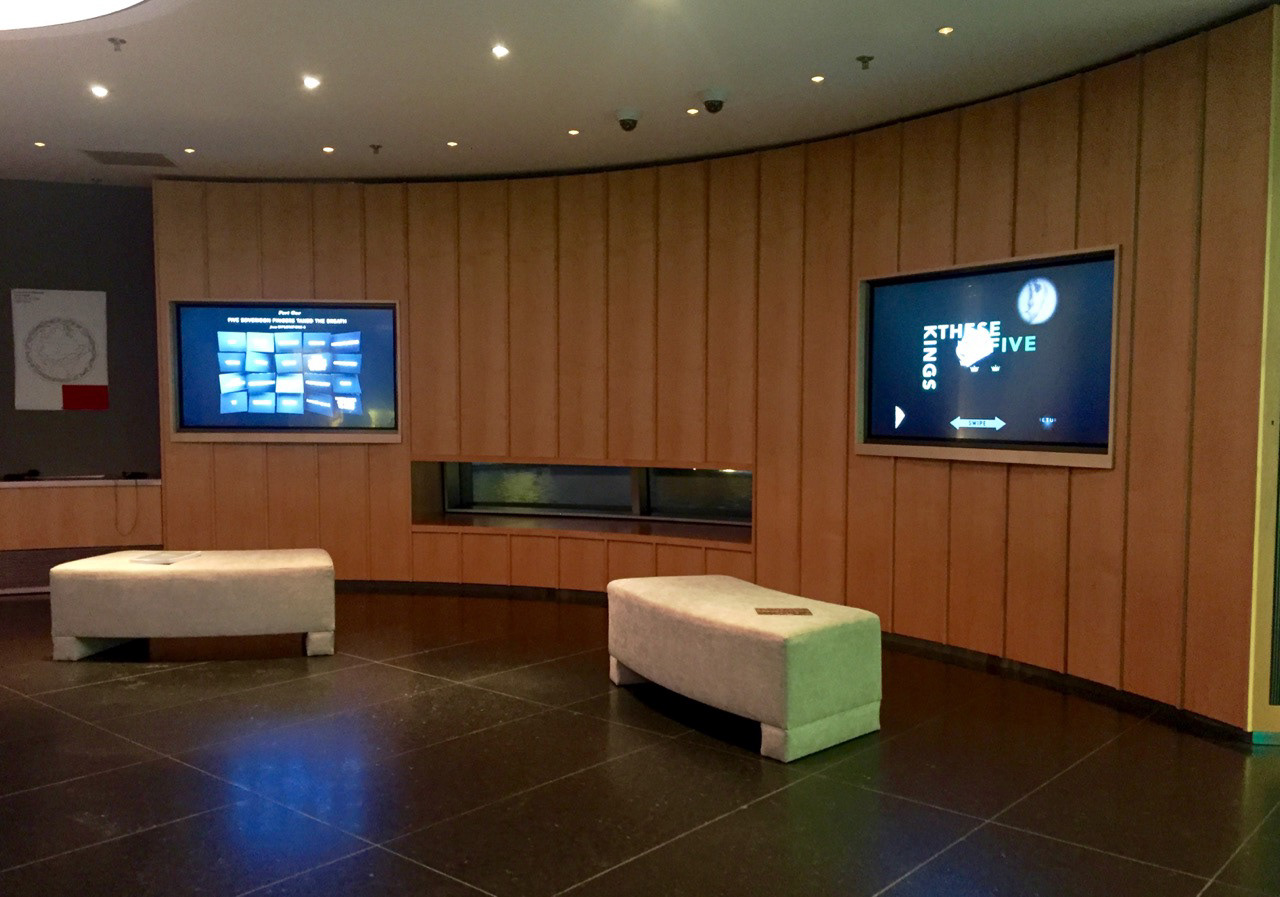 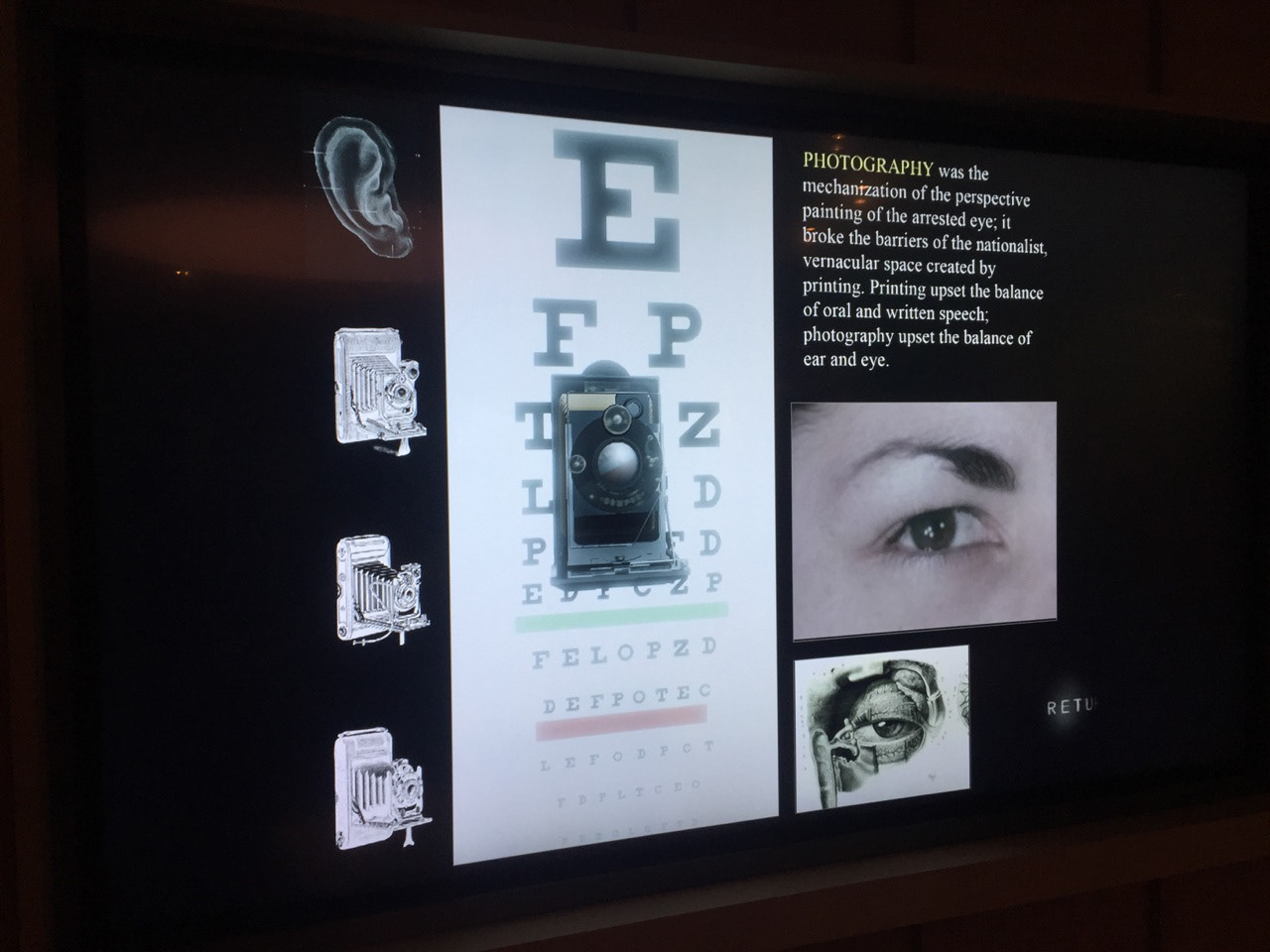 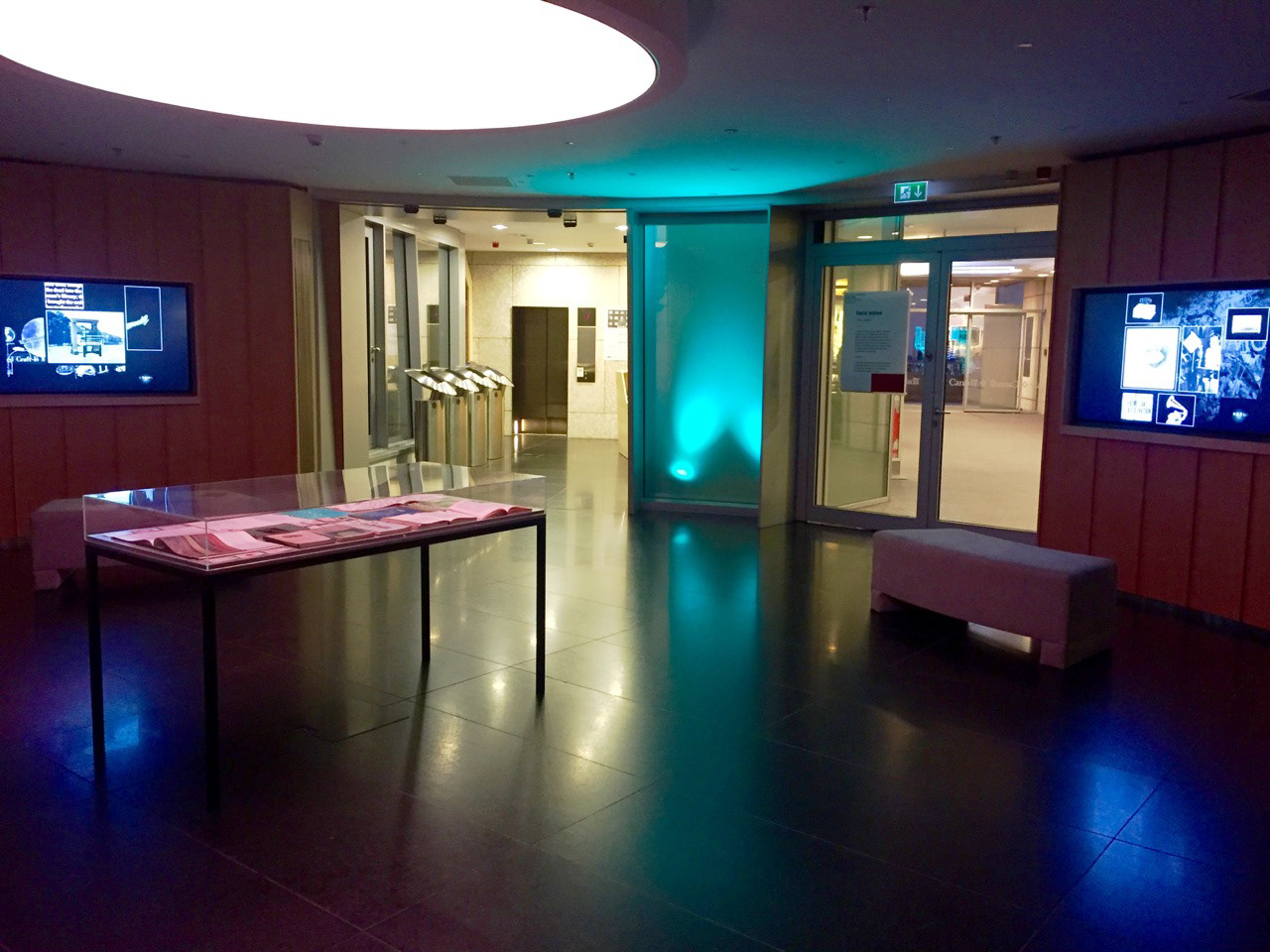 Exhibition at the Marshall McLuhan Salon, Canadian Embassy in Berlin, 2018 for the Transmediale Festival.
This interactive media artwork is a companion piece to a program of research headed by Janine Marchessault and Michael Darroch that examines the innovative interdisciplinary journal ‘Explorations’ published in Toronto between 1953 and 1959. This series of eight publications edited by Marshall McLuhan and Edmund Carpenter along with urban planner Jacqueline Tyrwhitt, political economist Thomas Easterbrook, and psychologist D. Carleton Williams, represents a landmark in Interdisciplinary Studies bringing together a publication of unusual intellectual diversity for its time, including anthropological studies of media effects, experimental poetry, scientific studies, and urban studies.
This artwork focuses in on a piece of text published anonymously in Explorations 4 (although it is often attributed to Marshall McLuhan and Edward Carpenter) called Five Sovereign Fingers Taxed The Breath. This text demonstrates the spirit of collective scholarship that formed in the seminars that Marshall McLuhan used to hold in the famous Coach House on the University of Toronto campus. It also signals the beginning of many themes that occupied McLuhan’s work for years after. It echoes, and even directly quotes from, the Dylan Thomas poem The Hand That Signed The Paper.
My interpretation transposes the text into an interactive space populated by 3D graphics, snippets of films, and audio interpretations of the text. In uses a vocabulary of interactive comic books to create dynamic collages and a non-linear experience of the text. It poises new explorations of the archival and database-centered experiences in the age of the internet and; hopefully, a model, championed by the Explorations Project, of a scholarship that is experimental in nature and aware of the effects of contemporary media.